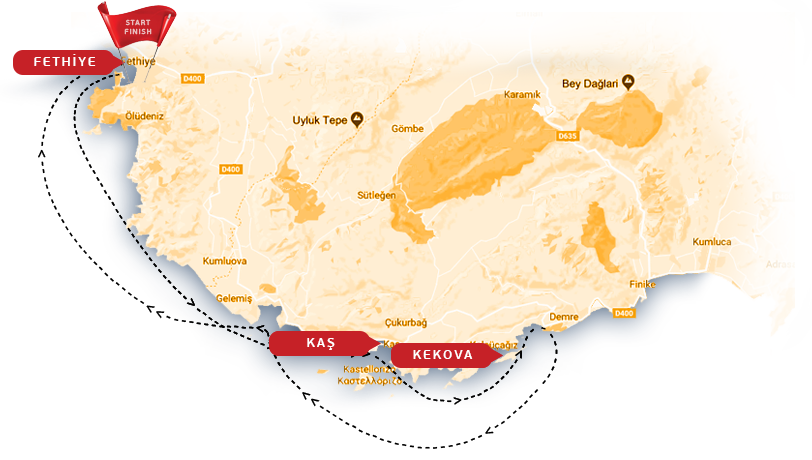 The marina starts at 13.30 in Fethiye Marina. While settling in, dinner will be served on the yacht and we will stay overnight on the ship in Fethiye Marina. Fethiye, known as Telmessos in ancient times, was the most important city located on the western border of Lycia with Caria. It is believed that the name of the city comes from Apollon’s son Telmessos. The city joined the Ottoman Empire in 1924. His name has changed many times over the years, and in 1914 the first Turkish Air Force Commander, called Fethi Bey, fell from a plane and died while on duty. In the south of the city, you will see many famous tombs and tombs that have survived from Antiquity, and one of the most famous and beautiful stone tombs is the tomb of King Amyntas. The remains of a theater, which were found during the excavations carried out by the museum recently, are in the city center.

While you are enjoying your breakfast, we will inform you about the cruise schedule and the yacht’s security procedures. We will sail to Ölüdeniz. Our yacht will anchor in Soğuksu Bay for lunch and swimming. The next stop will be Gemiler Island. An early evening stroll on Gemiler Island and a visit to the Church of St. Nicholas is recommended. Dinner and overnight stay will be in Gemiler Strait.

In the morning, we will set off early in order to comfortably cross the Yedi Capes (Seven Capes). We will anchor in Yeşilköy Bay, close to Kalkan, to have breakfast and enjoy the sea. Then, on our way to Kaş, we will take another break for swimming and anchoring in Kaş Harbor. Here you will have the chance to visit Kas, an old Greek town, and experience the nightlife in Kas. Kas, one of the most important cities of Lycia, gained importance in the Roman Times and eventually became the Episcopal center during the Byzantine period. Kaş is a rich country with its ancient and other historical values ​​and surrounding cities.

After breakfast we will go to the sunken city of Kekova. Here we will stop for a swimming break and lunch at Tersane Bay, where you will see an old shipyard, a church from the Roman and Byzantine periods. We will anchor in Üçağız Bay for the night.

After breakfast, it is possible to take a short trip to Kaleköy (Simena), where you have the chance to take some of the most beautiful photographs of Ancient Lycia. Lunch will be served at Gökkaya marina where we will anchor for swimming. We will anchor at another natural beauty spot in Ucagiz Bay for dinner and overnight stay.

After breakfast, we will move to Bayındır Bay and enjoy the sea. After lunch we will anchor in Kalkan Marina. An optional tour of the Lykian Cities can be arranged here. Xhantos, the capital of Lycia, Patara, the commercial and port city, Tilos, the sports city, Letoon, the most important religious center of the Lycian region, and the famous Saklıkent Canyon can be included in our route for this optional tour. Dinner and overnight stay will be in Kalkan port.

An early start to the day will allow us to sail to Camli Peninsula. After lunch, we will anchor in Batikkaya Bay for a swim and lunch. We will return to Fethiye port for dinner and overnight stay.